You probably have not heard of the 18 Year Property Cycle, right? Everyone knows about the 7-9 year cycle. Since the 1800’s in the older established economies like the US and UK, the property market has driven the economic cycle and it runs on an average 18 years. The last 3 cycles since the middle of the last century have run from 1955-1974, 1975-1991, 1992-2010. The current cycle started in 2011 and will run till about 2029 or so, with the top coming in 2026. What does this cycle look like? The chart below explains the stages in the cycle and outlines the various phases. 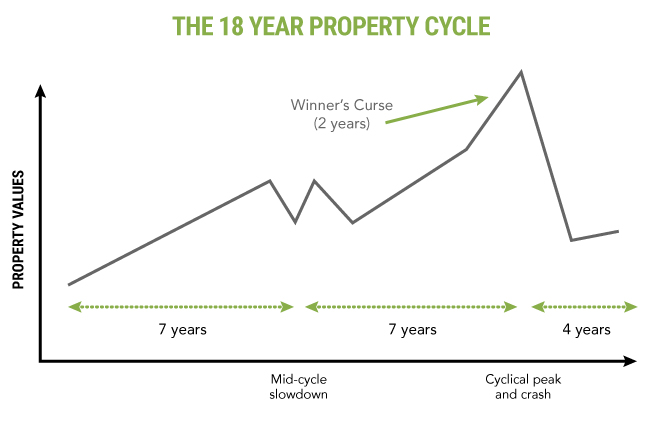 The first stage of the cycle is the recovery after the downturn. This is the period we are in at the moment with the start of the new cycle commencing in 2011. We are nearing the Mid-cycle slowdown, especially in Sydney. This could be a period of declining prices, or could be a period of sideways movements. Basically, property growth has overshot the mark and a period of consolidation will follow as incomes catch up and rental returns recover. The second growth period could see much more growth if banks release easy credit. There is a massive ramp and to end of that phase comes the “winners curse” as coined by UK economic commentator and author, Fred Harrison. After the peak and subsequent crash is a period of 4 years of decline and then consolidation lasting about 4 years. Why 4 years? Think how long bankrupts have to wait before being able to borrow again and re-enter the market.

In Australia, we were shielded a lot more than the US and UK the last cycle prior to the market topping out pre-GFC in 2007. Due to tighter lending regulation from the Government and the Australian Prudential Regulation Authority (APRA), our market especially in the non-resource states didn’t experience a massive correction. In the mid to late 2000’s, you couldn’t generally borrow more than 80% without mortgage insurance. Compare that to the US where they had the NINJA loans(No Income, No Job Applicants) lending to people on welfare with no jobs or assets. Lending 100% and even more. To us it seems absurd, but remember the banks are greedy and make money by lending out as much as they are allowed to. This led to a big crash in the US property market, unlike in Australia. For those old enough to remember, in the late 1990’s and early 2000’s before the Mid-cycle slowdown, the major banks were lending 95% without mortgage insurance and some of the second-tier lenders 100%. Again, this didn’t happen in Australia prior to the GFC due to more responsible lending insisted on by APRA which kept bank lending in check. We also had massive cash handouts from Kevin07 coupled with first home owner grants which actually spurred a growth spurt while property overseas came crashing down.

Remember, Australia has a large property market geographically and it is economically diverse. When Sydney prices were pulling back and tracking sideways, Perth, Darwin, Brisbane and most of the other cities were experiencing huge growth in the mid 2000’s. From 2003 to about 2009, Sydney was the worst performing property market of the capital cities. People have short term memories and only buy during the boom times and often during the “winners curse” period before the correction. As Warren Buffet says “be fearful when others are greedy and greedy when others are fearful”. Now is not the time to be rushing into the Sydney market.

We will delve deeper in the next few months, but in the meantime to find out more, I encourage you to read The Secret Life of Real Estate and Banking by Phillip J Anderson. For all your investing, whether buying shares, property or even commodities, understanding where we are in the property and business cycle will allow you to enter and exit your investments at the right times. It is difficult to find in Australian bookshops so we have organised a supply of the book at cost to our readers.