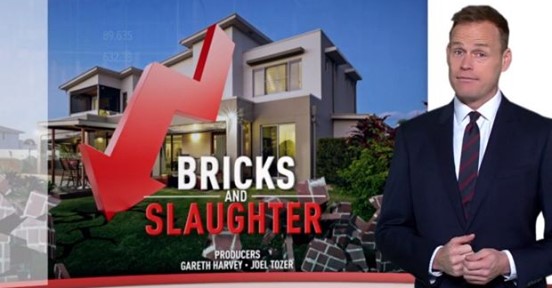 On 16th September, 60 Minutes screened a story titled “Bricks and Slaughter”.  I have been asked for my opinion on the 60 Minutes story.  Firstly, what a name for the story, is the first thing that comes to mind. News outlets thrive on bad news and sensationalism. They aren’t very accurate either and with very little fact checking whether it be politics, world events or in this case economics.

Australian property historically with the exception of mining towns and coastal towns, on average has never crashed 40% in a year, let alone in a period of a few years. For such a crash to occur we would need a major economic crash, a major exile in population or a major credit induced crash like the GFC crash experienced in the US. The 2007 property crash in the US was a result of insane lending standards or more a lack of lending standards. NINJA loans come to mind where couples who were both on welfare with no assets let alone a deposit, were lent 100% or more of the property value to purchase a home. Why? Simple answer is banks are greedy and create profits out of thin air and with very little government oversight, they went to town creating a credit frenzy which led to the credit induced crash of the property market in 2007. This was followed by the share market crash in 2008. This happens every 18.6 years on average. It is called the 18 Year Economic and Real Estate Cycle. We have been educating our clients and trying to educate the public, but not many are paying attention. Australia didn’t have a major property crash around 2007 for two major reasons. Firstly, APRA was very diligent in restricting loose lending by the banks. Secondly, our resource led economy was still performing well. It still is. 28 years without a recession and counting. With all economic and productivity gains captured in land values, is it any surprise we have some of the most expensive real estate in the world? For those that study and understand the 18 Year Cycle, it is not surprising at all.

There will be a world-wide property crash or major correction, but not now. It will occur 18-20 years after the last one. Take 2007 and add 18.6 years, puts us around 2026. Expect a credit induced financial crisis which will crash the property market around then. There is 400 years of data to prove this. What we are heading for is the mid-cycle slowdown or recession that happens in the middle of the 18 Year Economic and Real Estate Cycle. This is predicted by smarter forecasters than me, like Phillip J Anderson, to eventuate around late 2019 to 2020. Does this mean we will have a major crash? No, not usually. The last slowdown lasted about 1-2 years. Australia might not enter into a recession and continue it’s record period of expansion. However internationally, there will be a recession, most likely short lived.

Back to 60 Minutes! I must give them credit for finding a local agent who was willing to talk down the market, especially on television. Local agents rely on listings and sales to survive. It is always a good time to buy and a good time to sell, otherwise they wouldn’t be able to feed their families. They cannot easily up and move to another state or city where the market is doing well. That is about where the positives end unfortunately. The rest was fear mongering or taking individual struggles of property owners who either bought at the peak of the market and now are having health or work-related struggles or they got over excited and over leveraged. The retiree in South Australia is a classic example. Massively in debt and highly leveraged with investments in a higher risk growth asset like property and retired! That is bad financial management on his behalf. When he took out the loans, he would have been working. Now he is trying to refinance without income from employment and no surprise, he cannot service the loan. I am not defending the banks and I am sure there are cases of loose lending, but this is not likely one of them. If he sought financial advice from a quality strategic adviser instead of trying to copy his more affluent investor friend, the financial adviser would have helped him unwind the debt before retirement and move towards lower risk investments with a higher yield. He needs income to fund his retirement, not debts to a bank to repay. This is bad financial strategy and lack of planning for someone in his stage of his life and investment cycle, nothing else. Seek good financial advice is the take-out message.

Then there is that magical 40% statistic when it comes to property crashes. Whether it be Harry Dent or Martin North who was featured in this story, the coming crash is always 40%. Louis Christopher of SQM Researcher is the most respected and accurate property forecasters. Although he did say Sydney and Melbourne real estate is overpriced by about 40%, he has clarified on social media that he doesn’t mean the markets in Sydney and Melbourne will crash 40%, rather they will unwind over an extended period. Furthermore, he gave 60 Minutes over 45 minutes of quality data and research and instead, and instead they used just 1 minute of it and manipulated it to suit their agenda. History supports that this is the likely scenario, a gradual unwinding of the over stretched prices. You don’t tend to get more than a 10-15% pull back in these capital city property markets. In my opinion, I see a period of 4-6 years of little growth in the Sydney market as property prices take a breather and wages and rental yields recover over time. Supply will drop and then move towards a more balanced market. Yes, some property owners will suffer 40% or more drops in value. Most likely because they overpaid for that house and land package in the outer lying suburbs or that apartment in an area saturated with supply compared to second hand resales at the time, so it was never worth what they paid for it to start with. Add to that a 10-20% pull back in those suburbs of established properties and you have the magical 40% or more drop for some properties in Sydney and Melbourne. It happened in the last Sydney boom. Investors and owner occupiers bought over priced house and land packages in Kellyville which were completed in 2005 for $950,000 these were much more than comparable established houses in Kellyville were worth at the time. Those same properties resold in 2007 and 2008 at the market bottom for half that value, $450-$500K. Don’t believe me? I can give you exact addresses and you can look them up yourself. People have short term memories that rarely extend beyond a few years when it comes to investing. Did the rest of the Sydney market drop 50% from the 2003/2004 peak? Hell no. We have been advising investors to sit on their hands the last 2-3 years in Sydney and to especially avoid buying house and land packages or off the plan apartments, but many refused to listen to advice backed by evidence of the coming correction in the Sydney market and to a lesser extent the Melbourne market. Now that it is happening, they finally believe it. My favourite saying was, “you have missed the boat and you are swimming after it while the sharks are coming”. Hindsight is a great thing indeed. It doesn’t need to be this way. Learn about The 18-Year Economic and Real Estate Cycle and learn how to profit from it. Simple, yet not many listen. By the time you reach working age, you will be working and investing through two full cycles at best. By the time you catch on to how the system works, it is too late.

I will say it till I am blue in the face, there is NO CRASH of 40% coming in Sydney and especially not Melbourne. There will be a small correction followed by a period of stagnation for Sydney and to a lesser extent Melbourne. Why do I think Melbourne is going to perform better? Firstly, it has much better short, medium and longer-term population growth than Sydney. It has also overtaken Sydney as the best economy of the capital cities. Unemployment is still dropping and is very low compared to historical trends for Melbourne. It has the economic drivers which will correlate back into increasing land values. The 18 Year Cycle again in action. If you want to know more, read our free blogs and educational content on our website under the NEWS tab or register for the newsletter. Email us with questions or do the old-fashioned thing and give us a call. It’s FREE for now, but I should start charging for it just so punters will listen and action it. Until then, happy investing and don’t listen to the so called “experts”.  Instead listen to Phillip J Anderson and other economists and analysts that understand how the system works and learn to profit from it.