Waking this morning to the news of the budget gave me a laugh. I opened an email from The Real Estate Institute of Australia with a link to their press release titled “Budget benign for housing: REIA”. You can read it for yourself here: https://reia.asn.au/wp-content/uploads/2018/05/Media-Release-8-May-2018-Budget-2018.pdf  however, the first line says it all “The 2018 Budget had no measures that specifically address housing supply and affordability, according to the Real Estate Institute of Australia (REIA)”. I guess real estate agents are sales people and they profit from measures that increase affordability and hence demand for property. With the majority of buyers, 65% as of the last census, being owner occupiers, you understand their point of view.

However, we as students of The 18 Year Real Estate and Economic Cycle see this budget differently. If you haven’t read my blogs or studied the cycle, you are missing out on a massive advantage in predicting the future direction of the property market, share market and economy.

A whopping $75 Billion, yes you heard it correctly, of transport infrastructure. This will drive economic activity and will be captured in the one place, land values. It will create jobs to build the infrastructure and will facilitate the movement of people, goods and services throughout the nation. Land in close proximity to the infrastructure will increase in value and past studies in major cities around the world quantify a 4.5 times multiplier. You as the land owner will benefit. So to say this is a benign budget for the property asset class is not accurate for those who are fortunate enough to have come across the work of educators like Phillip J Anderson on The 18 Year Cycle.

The map below from Commsec details the spread of the spend. Notice the majority of infrastructure is in the capital cities, especially focused on Sydney, Melbourne and Brisbane. 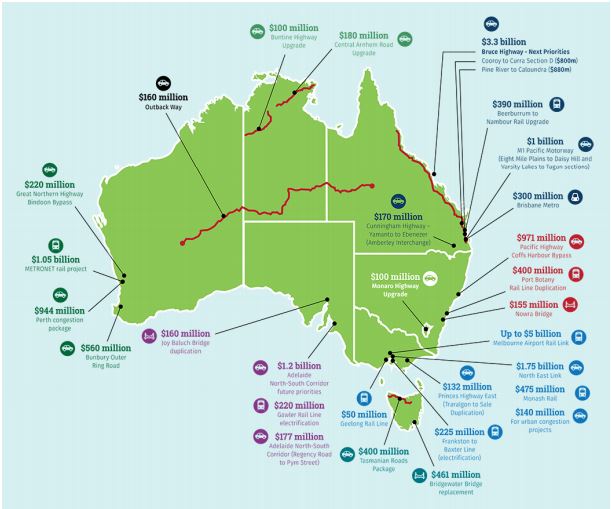 $3.5 billion in funding for The Roads of Strategic Importance initiative to upgrade existing roadways. This will facilitate the movement of goods, services and people and have a significant economic impact

The breakdown of what each state and territory will be receiving from The Roads of Strategic Importance initiative is:

The larger cities will also see a boost through the $1 billion Urban Congestion Fund to reduce the level of urban congestion.

For a breakdown for each state, territory and regional areas is as follows (1):

Queensland’s Great Barrier Reef was mentioned in particular, which includes:

Overall an impressive infrastructure spending spree which is well overdue. It will create jobs not only to build it but also to maintain it into the future. It will facilitate increased economic activity. All this which be captured in land values. If there are approximately 15 million tax payers in Australia, the cost of the $75B is $5000 per tax payer. As a land owner within close proximity to any of these infrastructure initiatives, especially in the capital cities, you are likely to pick up capital gains of much more than that let alone increased rental income from the higher demand due to the benefits derived from increased demand. This is an example of how you the property owner benefits from the capture of the Economic Rent as defined by the economist David Ricardo. The cycle will still turn and repeat as it has done for hundreds of years. The only choice you have to make is will you profit from it, or will you let the 2-3 cycles in your lifetime pass you by?